skip to main | skip to sidebar

By now, most of you folks out there will probably have heard about the new Wonder Woman costume- and some may have seen it. I've been doing a little reading, looking at fan reaction, and looking at the various looks that Wonder Woman has had in the past, and I am now able to say my verdict: I like it.

The costume has been receiving heavy criticism. Fans have been saying that it looks dated- something that looks like it was from the nineties, and not in a good way. The costume, redesigned by Jim Lee, retains some of the classic signature Wonder Woman motifs- the bracelets, the lasso of truth, and the headband. However, everything else has been completely revamped and changed.


Wonder Woman's chest piece has been replaced by a red shirt, with a neck line going done to the breasts. Along the neck line, we can see a smaller Wonder Woman emblem than we are used to. She has retained her belt, albeit a slightly changed one with the image of an eagle imprinted onto it. She has tight-fitting pants, which  by Jim Lee's design look padded, with some sort of strange shoe. She has a sporting leather jacket, also padded, and new bracelets. This time they're red and gold, and with a W imprinted on them. Look at the above image for more details.

As for the new direction of the series, J. Michael Straczynski has said the following. "The Gods, for reasons of their own but which may have something to with their survival and perhaps the survival of Earth itself, have changed the timeline. In the new timeline, years ago the Gods removed their protection from Paradise Island, and left it vulnerable to attack. And attacked it was. Led by a dark figure, a veritable army descended upon the Island, equipped with weapons that could kill even the Amazons. Outgunned, doomed, Hippolyta gave over her three-year-old daughter to a handful of guardians who spirited her away as Hippolyta led one last desperate battle against the forces that had come to destroy all she had created. In that final battle, she and most of the Amazons were killed, though some managed to escape." Diana has been raised in a modern, urban setting, and her mission is to restore the original timeline.


As for fans of the original costume, this is good news. If the new costume misses the mark and turns out to be more bothersome than compelling, the story can end with Wonder Woman restoring the former time line and getting her classic costume back. But we all have to keep in mind- when Spider-Man's symbiote costume appeared in the Amazing Spider-Man #252 it was also heavily criticized. It continued to reapear and dissapear according to fans, until finally finding itself a more permanent home- with Eddie Brock. However, the costume is now considered to be as classic as the original itself. Hopefully this is what will happen with Wonder Woman's costume, unlike her previous 60's mod look:
So I have decided that I rather like it. It's colorful, iconic, and very recognizable. It's a throwback to the classic costume, and since the costume has not changed in years, it's good that the costume has finally changed. It's also very modern, and kind of punky. Overall, it's a change for the better and I cannot wait until for more!
Posted by ajsztehlo at 4:06 PM No comments:

My LaGuardia is almost finished. You have no idea how this has made me feel. This paper, which has been the bane of my life for the last three months, is almost at an end. All I need to do is a few edits, and then it is done. The paper is due on Monday.
The paper I have written is about Miyamoto Musashi, the legendary samurai from Japan. I analyze the book he wrote, Go Rin No Sho, and talk about his strategy and how he applied it in his duel with Sasaki Kojiro. Anybody who wants to read the paper can read it shortly. I'll post the final grade up here when I get it!
Posted by ajsztehlo at 7:45 AM 37 comments:

Something Funny I Made... 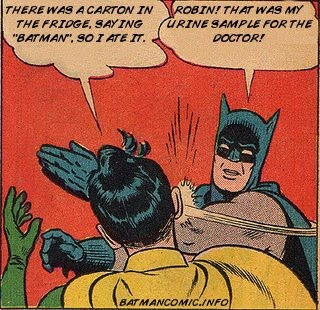 You can make your own at Batman Comic. It's a really neat tool that allows you to add your own text to the panels provided.
Posted by ajsztehlo at 1:39 PM No comments:

The Wolf Man, perhaps Universal’s best character from the classic rogue gallery that is the Universal Monsters, Get’s to hunt again in the remake of the 1941 original, The Wolfman. The movie itself was brilliant, to say the least, but those who go expecting a big picture remake of the original will be surely disappointed.

The Wolfman tells the story of Lawrence Talbot (Benicio Del Toro), who returns to , after receiving the news from that his brother is dead. There, he reunites with his father, Sir John Talbot (Anthony Hopkins) and meets his brother’s girlfriend, Gwen Conliffe (Emily Blunt). After seeing the savage wounds on his brother’s body, he concludes that nothing short of a large beast could have done such a thing. He goes out to hunt the beast (which local peasantry tell is a werewolf), but is infact bitten by the beast himself. The local legends come true- on the night of the full moon, Lawrence Talbot transforms into the Wolf Man, and instantly starts attacking and viciously killing the local population. Scotland Yard inspector Francis Aberline comes to inspect the gruesome deaths, and becomes obsessed with hunting down the Wolf Man.

Benicio Del Toro, who was last seen in the equally brilliant Che, delivers a fantastic performance as Lawrence Talbot and the Wolf Man. He plays the part of Lawrence Talbot rather coldly, so it is hard to gain an emotional connection to him, but this is redeemed when Emily Blunt arrives as the love interest. Anthony Hopkins also gives an equally chilling performance as his father. Art Malik also appears in a smaller part, which is a shame. Joe Johnston should have utilized his part as the Talbot servant a bit more.

One thing to note is that this film is not for the faint hearted. When the Wolf Man attacks his prey, you see everything- and when I say that, I mean their internal organs. The film is horrifically violent. It has everything from disembowelment to beheading, but it is done in a style where it is not distasteful. I think the film is a great retreat from the mindless slashers that populate the horror genre today. However, I would not suggest bringing any children with you, as they’ll probably have nightmares for months.

Overall, The Wolfman does not disappoint. However, those who are fans of the original (including me) will be a little disappointed at how different the film is from the original. Although it utilizes the characters and the very general story of the werewolf, it does nothing in the way of a remake. It is an entirely different movie. Whilst this is refreshing, those who are hardcore fans of the original (and the Universal Monsters brand in general) will be disappointed at the lack of similarity.

Hopefully, the film will open up some more remakes of Universal’s Monster properties. There is word of a Creature From The Black Lagoon remake, as well as a Bride Of Frankenstein remake. Additionally, there is an upcoming project named Dracula: Year Zero, which follow the events that lead to Dracula becoming a vampire. However, this does not mean anything- these projects have been floating around since the rather disappointing Van Helsing, and nothing has come of them. Hopefully, something will, but for now, the future remains uncertain.

I haven't posted in a long time, so this is just a small catch up on what's been happening. I got really excited today because Steven Soderbergh's "Che" has just come out in a 3 disc set in the Criterion Collection. If anybody knows me, they know I'm obsessed with getting Criterion editions of some of my favorite films. As soon as I have the money, I'm going to Barnes And Noble and purchasing a copy. It's 5 hours long (although it was theatrically released in two parts, and that's how it's presented here), and is pure brilliance! Benicio Del Toro, who is set to appear in next-month's "The Wolf Man", acts as Che. He is one of the greatest actors of his generation, and I cannot wait to see his performance in "The Wolf Man"!
I've also started to watch Tina Fey's "30 Rock", a comedy series that follows the daily lives of the crew on the fictional "TGS With Tracy Jordan". Tracy Morgan, Tina Fay, Alec Baldwin, and Jack McBrayer are brilliant in the TV series. Alec Baldwin is hilarious with his all business approach to television, Tracy Morgan's portrayal of true idiocy is brilliant, and Jack McBrayer melts your heart as the simple-minded yet loyal Kenneth. Anybody who wants to watch a great television series should watch "30 Rock"!
Other than that, I have also started watching the television series "Star Wars: The Clone Wars". It's very good, but I am not as impressed with it as I was with the 2003 micro series that was on Cartoon Network. The new series has plots that are worthy of the original trilogy, and the visual style is amazing, but the script is sometimes a bit childish. However, I would still recommend it to friends, and I recommend it to you.
Posted by ajsztehlo at 2:15 PM 1 comment:

Both Boris Karloff and Bela Lugosi have been in excellent horror films on their own and have also created monster icons in their own right, but some of their best work together lies in the two Edgar Allan Poe films made by Universal in the 1930s: "The Black Cat", and "The Raven".

"The Black Cat" tells the story of the strange and violent relationship between Dr. Vitus Werdegast and Hjalmar Poelzig. For once in his career, Bela Lugosi plays the dashing good guy, but this is to little affect because of his sinister aura. The ending is so shocking and masterfully shot that the film will leave a mark on all viewers! The film features a very modern Bauhaus type furniture, which is strange for a horror story and a pleasant departure from the usual cobwebs and staircases.

"The Raven" is the better of the duo and tells the story of a surgeon, Dr. Richard Vollin, who falls madly in love with a woman soon to be married. He takes in and disfigures murderer-on-the-run Edmund Bateman, who is soon unwillingly drawn into his web of murder. Boris Karloff gives another tragic-but-brilliant performance, and his final heroic act will bring tears to all eyes. Bela Lugosi also gives one of the genre-defining roles as Dr. Vollin, perhaps the greatest mad doctor of all time.

These two films are brilliant examples of Universal Horror. Although they do not feature the blatant German Expressionist photography that "Dracula", and "The Mummy" employed, they do takes us through a newer, more modern type of horror. The films are definitely not supernatural, and focus on psychological horror instead.

The true star of these films, though, is definitely Boris Karloff. His performances in these films are so unnerving (The Black Cat) and tragic (The Raven) that nobody will forget them. The sinister Poelzig will frighten everybody, and the tragic figure of Edward Bateman will definitely make all cry.
Posted by ajsztehlo at 6:25 PM 1 comment:

Why Do People Kill... 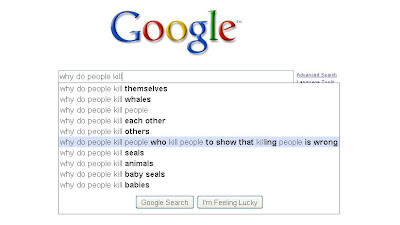 Posted by ajsztehlo at 7:16 AM No comments:

I will be participating in the Boris Karloff Blogathon. Check back between November 23 and 29 to see what I'll post!